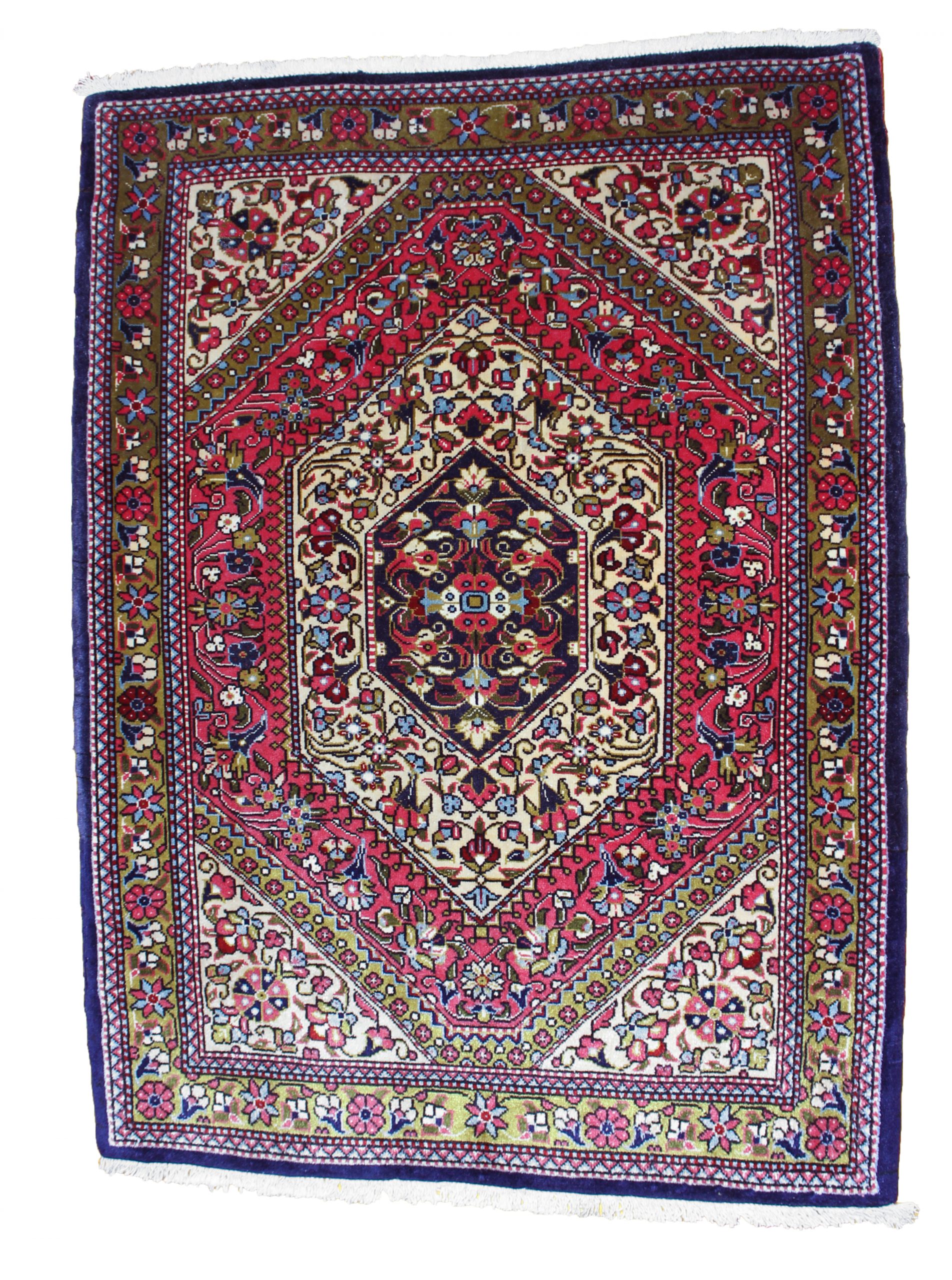 kork (kork is the finest wool that is essentially baby lamb wool sheared specifically at the nape of the neck) pile on cotton foundation brilliantly fine in excess of 50 knots per 70mm age no more than 50 years.

Qum (Quom, Kum)
Rug-making was established in the ancient holy city of Qum since second half of 21st century, which is considered rather new by Persian weaving standard. Since the area has not got deeply rooted (thousand years old) weaving tradition, its designs are borrowed from those of Kashan, Tabriz, Isfahan and other older weaving centres. Some of these adaptations are combinations of elements from various patterns, and one may argue this combined effort is something original. The Shah Abbas pattern, with or without central medallion, is popular among the weavers in Qum. All-over pattern of repeating botehs, a garden design, Zel-i-Sultan (small bouquet design) are similarly popular in Qum rugs. Having said that, since so many designs appear in Qum rugs, the only constant to identify the rugs is through colour and weaving technique.

Weaving technique in Qum is very similar to that used in Kashan; the wool is of similarly high quality. Shades of red and blue are the most common field colours, and a good deal of white is used in the designs. The weaving is done on cotton warps.

Qum is best known for its silk pile rugs. These silk rugs may have warps or wefts, or even both, in silk. For obvious reasons, a rug that is all silk is considered highly valuable and sought after. Silk rugs comes in sizes from 2 ½ by 1 ½ feet to 8 by 5 feet, with 5 ¼ by 3 ½ feet the most common. These silk rugs are produced in traditional designs and in interesting hunting patterns that are quite suitable for hanging. Naturally, the knot count is critical in assessing silk rugs because it can vary a great deal. One silk rug may seem very handsome when sitting there all by itself, but it will most definitely be less impressive when placed next to an even finer silk carpet.

Both wool and silk rugs from Qum are ranked higher on the price scale, with silk pieces at the top of the scale. As one would reasonably expect, silk rugs hold onto their value the most and are most suitable for rug investors.